skip to main | skip to sidebar

How many blogs has twitter killed besides this one? Sorry for the lack of posts but if you want the daily updates follow me on twiter.
Posted by chris windus at 5/02/2011 01:34:00 AM 3 comments:

What the F Happened to Feb? & A Day in LA

It's been a while since my last post so I'm going to ramble. We got crushed in February. Literally. Chef Patrick Sheerin(@chefintheory) joined us during this time, quite possibly on one of our busiest nites. Had to be the night I scheduled myself to expo 2 lines at the same time but as we all know this is how it works. S hits the fan at light speed when it is least expected. Patrick is a great chef from the Signature Room on the 95th floor at the John Hancock Building, Chicago. Not to mention bro of former Blackbird Chef Mike Sheerin who is pursuing his own venture. Of course I gave him the I'll hook it up nod via twitter and managed to be so busy I didn't even pick my phone up the whole day to check and see it was the day he was coming. It was in the back of my mind but just escaped me in the chaos. That's not ok in this world, my apologies to Pat and his family but I hope we made up for it. I did eventually get a chance to talk to him at the end of the night. What a great down to earth person who knows his stuff. Great to see you Pat, wish I could of joined you guys in Charleston.

Let's see, I have the opportunity to go to LA, leave at 7:30am my time, arrive 10am LA time, hang out for 12 or so hours, do some business, and haul ass back to Orlando on the red eye, arrive back home at 5:50am the next day, pass out for four hours, and head to work. OK, I'll do it. After attending Star Chefs where else would I go but Red Medicine. Jordan Kahn's presentation was ridiculous. In my opinion, Antoinette should of let him walk off the stage, saying nothing, and pretty much letting everyone in the armory know that he was a badass. That would of been the ultimate response but I know Antoinette's motives, she wants him to talk and tell his story to everyone. I would have been more enamored with him if he would have said nothing and left. His demo was that good. At the end I could feel that all he wanted to do was leave and not talk but I guess if Star Chefs asks you to do a demo you are obligated to talk about yourself. Finally after his OCD via TK was satisfied and his station was clean, he came back and talked to Antoinette about Red Medicine.

I called Red Medicine the night before at 4am eastern, not able to sleep in anticipation of my flight. It was 1am LA time, the hostess answered but I could barely hear her. It sounded like a giant party, awesome!

After arrival and a crappy rent a car, I made my way around The Beverly Center and found myself walking by Bazaar, Jose Andres place at the SLS Hotel in Beverly Hills. There were a ton of restaurants, all well known, all in this little area. Santa Monica seafood was delivering to Matsuhisa, I got a glimpse of some of their pristine product and it looked awesome. I wish I had more time! 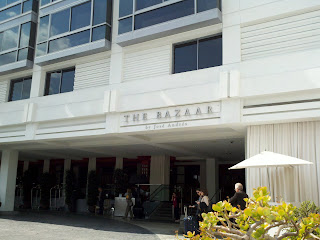 I managed to go for lunch, not the busiest time, everyone was pretty relaxed but with a sense of intensity, ready to jump on my table with anything I might need. I hit my server up for a homemade squirt, they make all their own sodas in house. Bread is provided by Bouchon, coffee by intelligentsia. You can't go wrong.

It was pretty damn good 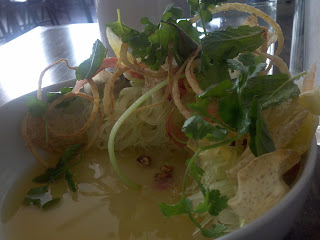 The server said the pork belly bahn mi was her favorite so I got that. It was good, I thought the pork belly could have had little more presence but it was good. The house made siracha is dangerous. 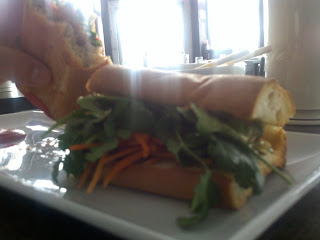 After lunch it was all business for a couple of hours then off to the 'ole In-N-Out burger. I don't understand how they have 20 cooks making hamburgers and fries when I have 7 on at a time making some ridiculous stuff. Doesn't make sense but it is good and quick. Go animal style on your burger. It's not on the menu, just ask for it. 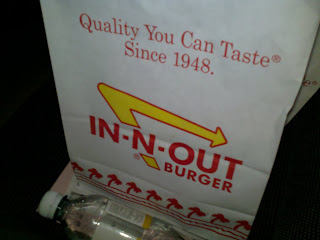 I will admit I did animal style on the fries and it was too much. 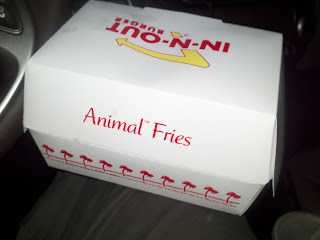 We have a crazy week coming up so while it was slow we took the crew out to Torm Siverson's Pasture Prime Farm for a little field trip. I took a couple of videos so check it out see what we were up to. I will warn there is some graphic nature to these videos, we don't show any animal being killed but pretty much everything right after that point in on the video. If you have a problem with this then don't watch it. Chicken doesn't just fall out of the sky and land on your plate, someone has to do this.
With this in mind Torm goes above and beyond to provide a comfortable and caring environment while the animals are with us. He has a great pyrenees that was raised with chickens. He now lives with Torm's red ranger and poulet rouge breeds to watch over them and protect agaisnt any predators until they are big enough to fend for themselves. The chickens are rotated like crops from field to field, fertilizing the land to help with grass growth come spring. The grass in turn will feed the 140 head of Wagyu cattle that also inhabit the 400 plus acres here in Summerfield, Florida. There will be more videos to come about Pasture Prime Farms

Check our blog roll and you will see a new site that has just "POP'd" up. Sushi Pop has opened in Oviedo,Fl. One of my former sous chefs, Michael Gleason, is back in town teaming with resident sushi mastermind Chau delivering some really great food. A small operation presenting old school sushi and main courses with a twist. Japanese pop culture is the overall theme complete with anime playing on flatscreens, creative server attire, bonsai trees galore and a cool ass check presenter, oh yeah and the food is good to boot. Modern equipment and technique are in place. Check them out as this budding restaurant makes a name for itself, Oviedo finally has a restaurant that is not corporate, bland B.S. Congrats Mike and Chau, we will be back.
Posted by chris windus at 1/17/2011 12:09:00 AM No comments:

2011 so far has been filled with some great opportunities and products that have come our way. Tomorrow we will be in the kitchen prepping for a photo shoot with chef's garden products. Last week we put together some great dishes to shoot but with our resident photographer out on medical leave. With insufficient lighting due to poor weather we lost the natural light that shines throughout our private dining room and really makes the colors pop. We got some good photos but not great so we have one more opportunity to get it right. We hired outside help so in the end we should have some sweet, cleaned up photos of the food that will hopefully make it into the chef's garden mailings and email blasts. Be on the lookout for some bluezoo/Chef's garden inspired dishes headed your way in the near future.

Tuesday, January 18th we are making another homage to Torm Siverson's Pasture Prime Farm with the bluezoo crew. I have also invited some chef friends from around the area to join us on our excursion. We will be touring the farm, checking in on our favorite mangalitsa pigs, some new berkshires, red ranger and poulet rouge chickens that we will be processing on site, as well as the grass fed wagyu cattle that made pasture prime what it is today. I should have a nice post up on it later next week. What's not to enjoy, farm tour, lunch at the farm, some serious education on how farm life really is, history, and of course we Florida boys and girls love our firearms so some target practice and accuracy side bets may come into play. That should fill up just enough time to haul ass back to the restaurant and feel inspired to create some exciting dishes.
We did this last year in April and since then we have a lot of new faces in the front and back of the house. Many of them have never seen how a family run local farm works and hopefully this will provide a much needed break from the monotony as well as invaluable information that will result in higher sales of Torm's product, a story to tell the guests, and ultimately an increased level of respect for our products.
Posted by chris windus at 1/13/2011 11:37:00 PM 2 comments:

The busiest day of the year is hear again, armed with a new video camera I will hopefully be able to share some of the happenings if I can figure out how to post it. The final tasting menu will not be printed until sometime tomorrow afternoon but this is what we have so far

From the "chef's garden"....seasonal assortment of organic vegetables in various forms

Our guests have the option of a 5 or 7 course tasting, the full a la carte menu will be available as well. This has been a challenging year for us, lots of new faces in the kitchen still learning and training but doing well. 580 on the books, 1 chef, 1 chef de cuisine, 9 line chefs, 1 butcher, and 2 prep chefs so that only leaves 41.4 covers per person we have worry about. Roughly 2000 plates, it's going to be fun.
Posted by chris windus at 12/31/2010 12:40:00 AM No comments:

Bill Rovillo and his family loved the restaurant so much they named their boat after us. This happens to be the bluezoo 2, since they sold the original bluezoo boat and upgraded. I thought it was awesome and had to have them send me a picture of it. Here it is. 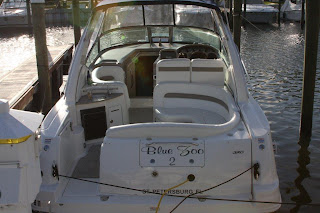 Those are some loyal guests. 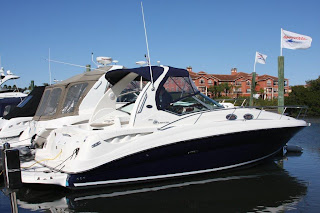 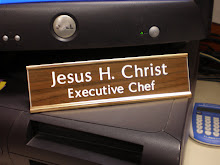 A cook's night out after staging at McCrady's 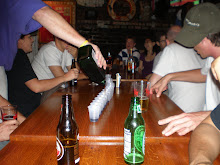 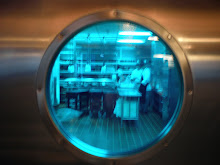 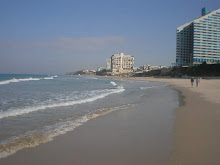